On arrival in Entebbe you will be met at the airport where you are transferred a short distance to your comfortable guesthouse for an overnight stay. This day is set aside as an arrival day. 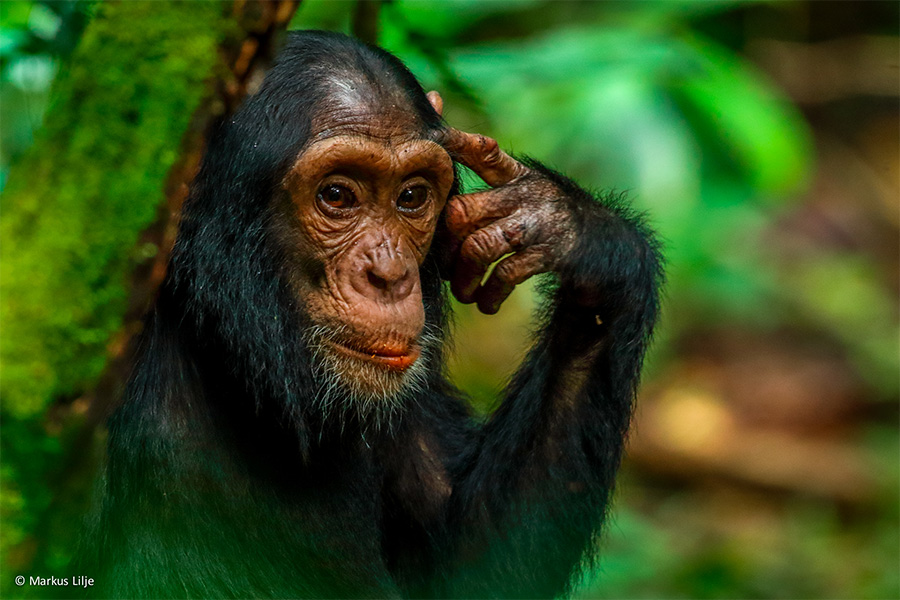 After breakfast you strike out westwards towards the towering Kibale Forest boasting the highest concentration and diversity of primate species of any reserve in East Africa. Kibale Forest is however most famous for its incredible population of Chimpanzees, which will be one of the undoubted highlights of our tour. Travelling on both paved and dirt roads you pass through verdant rolling hills and picturesque traditional Ugandan villages with rural scenes of local people tending to their crops. Approaching the foothills of the Ruwenzori Mountains or “Mountains of the Moon” you enter Uganda’s famed tea plantation region before continuing onwards to Kibale.

Today you will spend most of the day in the wondrous forest of Kibale searching for our closest living relative – the Chimpanzee! In the morning and afternoon you will embark on a dedicated Chimpanzee trek making your chances of finding these charismatic creatures excellent! They are noisy and, if you do manage to come across a troop, their thrilling whoops, shrieks and grunts are likely to be heard before they are seen.

As much of their diurnal time is spent feeding, an encounter is likely to involve observing them gorging on fruit (especially figs!) all the while engaging in the subtleties of Chimp etiquette. 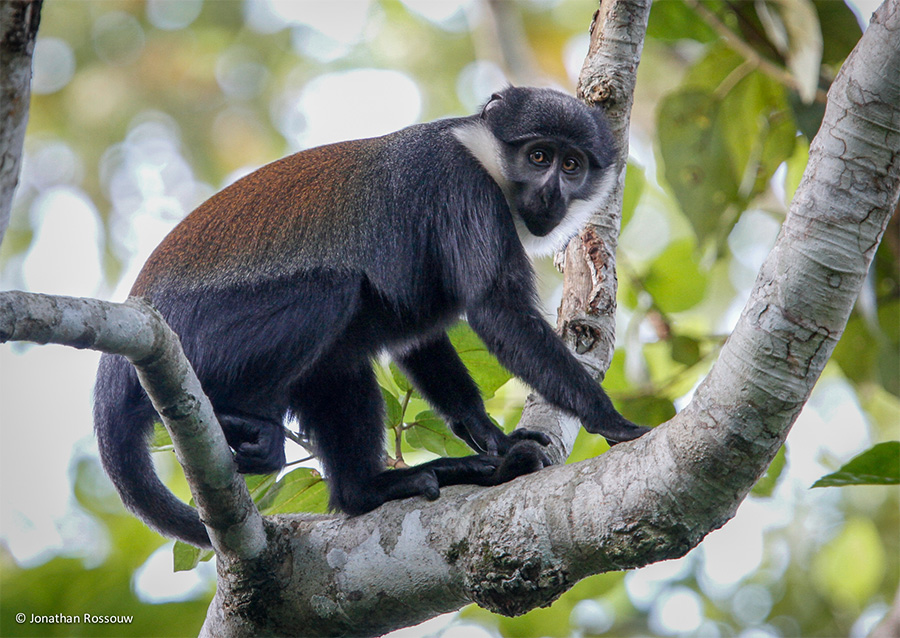 Here too, in the riches of Kibale, you are likely to encounter other rare and colourful primates, including Guereza Colobus, Central Africa Red Colobus, Blue Monkey, the highly terrestrial L’Hoest’s Monkey, Gray-cheeked Mangabey and the delightful Red-tailed Monkey. As you explore these forests for mammals you may well encounter some of the avian gems that grace this forest; bird species here are typical of medium-altitude forest and include the globally threatened White-naped Pigeon, Narina Trogon and Superb and Green-headed Sunbirds. A nocturnal outing will be well worth your while for these forests are home to a range of endearing Galago species and other creatures like Lord Derby’s Anomalure, African and Palm Civet and Servaline Genet, most of which you would be extremely fortunate to encounter.

After enjoying a final morning at Kibale you head south to the famous Queen Elizabeth National Park – offering the best chances in Uganda for big game and savannah species and thus deservedly Uganda’s most popular game reserve. Queen Elizabeth National Park is dominated on its northern border by the snow-capped Ruwenzori Mountains. Accommodation for the night will be at a well-appointed and scenic lodge within the park boundary, situated on a lofty peninsula overlooking the teeming Kazinga Channel and splendid Lake Edward. A highlight of your afternoon will be a fabulous boat cruise along the Kazinga Channel, which allows a close approach to African Buffalo, Elephant and hundreds of Hippopotamus in addition to scores of delightful water birds.

It is also possible to hear the distant roar of Lions and scan onto the active channel far below for Hippo and Elephant. Not far from your lodge, in the Acacia and Euphorbia dominated woodland, resides one of the area’s most bizarre mammals, the Giant Forest Hog, and you will be sure to make a concerted effort to track down this unusual and rather brutish creature. There are few places on earth where this creature is easy to see and while a sighting is by no means guaranteed you do have an excellent chance of seeing this creature here! Searching for birds around the lodge itself is also rewarding, with resident and spectacular species including Grey-headed Kingfisher, Black-headed Gonolek and Red-chested Sunbird.

Today you spend time in the spectacular Crater area in the foothills of the Ruwenzori Mountains before making your way to the remote southern section of the Queen Elizabeth National Park, where you will spend your final night. Species you have a good chance of finding include Lion, Leopard, Spotted Hyena, African Elephant, African Buffalo, Uganda Kob, Bushbuck, Hippopotamus, Topi, impressive Defassa Waterbuck, Olive Baboon and comical Warthog.

This park is very rich in habitats and this is reflected by the huge bird list of over 550 species, making it one of the largest lists for any protected area in Africa.

One of the star attractions of the Southern part of Queen Elizabeth National Park are its “tree climbing lions” while these animals are still very much part of the African Lion population (Panthera Leo) they spend a large portion of the day resting in trees, a behavior trait seen more commonly in Leopards (Panthera Pardus). You will search trees and thickets for this region’s famous lions and the marvelous photographic opportunities they present. 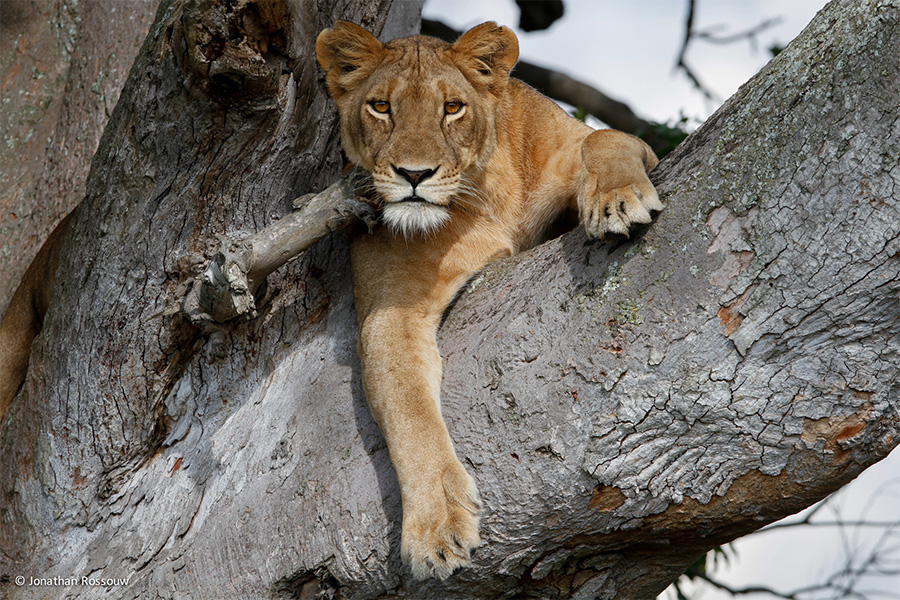 Leaving the riches of Queen Elizabeth behind us you make your way once again to the forests of western Uganda, this time to Bwindi Impenetrable National Park, at the northern end of the fabled Virunga range. You will spend a total of three nights at Buhoma, the headquarters of Bwindi Impenetrable National Park. This is a region of volcanoes, jagged valleys, waterfalls, lakes and dramatic mountain ranges. The Park is a UNESCO World Heritage Site and is home to approximately half of the world population of 650 Mountain Gorillas. Once part of a much larger forest that included the Virunga Volcanoes in neighbouring Rwanda, Bwindi Impenetrable National Park is now an ecological island within a sea of human cultivation and therefore of immense conservation importance. Buhoma lies in the valley of the Munyaga River at an altitude of 1500 meters above sea level, and is flanked by steep, forested hills. Around 350 bird species, 200 butterfly species and at least 120 mammal species have been recorded in this biodiversity hotspot.

Approximately 420 gorillas live at Bwindi and these are divided into 12 or so groups. Here we will take an unforgettable gorilla-tracking excursion (there will be the option of doing two days of tracking), visiting one of three groups of remarkably peaceable and tolerant habituated Mountain Gorillas. These are the largest of all primates with “silverbacks” (mature males) sometimes weighing up to 200 kg! Spending an hour with these gentle giants is, without a doubt, one of the most exciting and emotional wildlife experiences on Earth. In order not to disturb these magnificent beasts and not to expose them to infection (a common cold could be fatal) you will stick to the parameters designed by conservationists. While in this area you will also take the opportunity to amble a gentle forest trail near your camp enjoying the colourful diversity of birds and multitude of butterflies that has made this a very popular trail.

Other mammals that can be encountered with some luck in this regal forest are Chimpanzee, L’Hoest’s Monkey, Blue and Red-tailed Monkeys, Yellow-backed Duiker, huge Guereza Colobus, and several species of squirrels including Fire-footed Rope, Carruthers’ Mountain, Ruwenzori Sun and Red-legged Sun Squirrels. To boot this vast reserve also offers arguably the most productive montane forest birding in Africa and supports 23 of Uganda’s 24 Albertine Rift endemic bird species.

Today you proceed from Bwindi to the lovely Lake Mburo National Park. After travelling through mixed broad-leafed and Acacia woodlands and wetlands you arrive at the park for a one night stay in your tented camp set in a secluded wooded area. Before arriving at the park you pass through the Ankole District where young children tend to herds of world-famous long-horned Ankole cattle; bred in this region for centuries and an indicator of personal wealth. If time permits you will take an afternoon drive that will yield sightings of a variety of mammals and savannah birds. 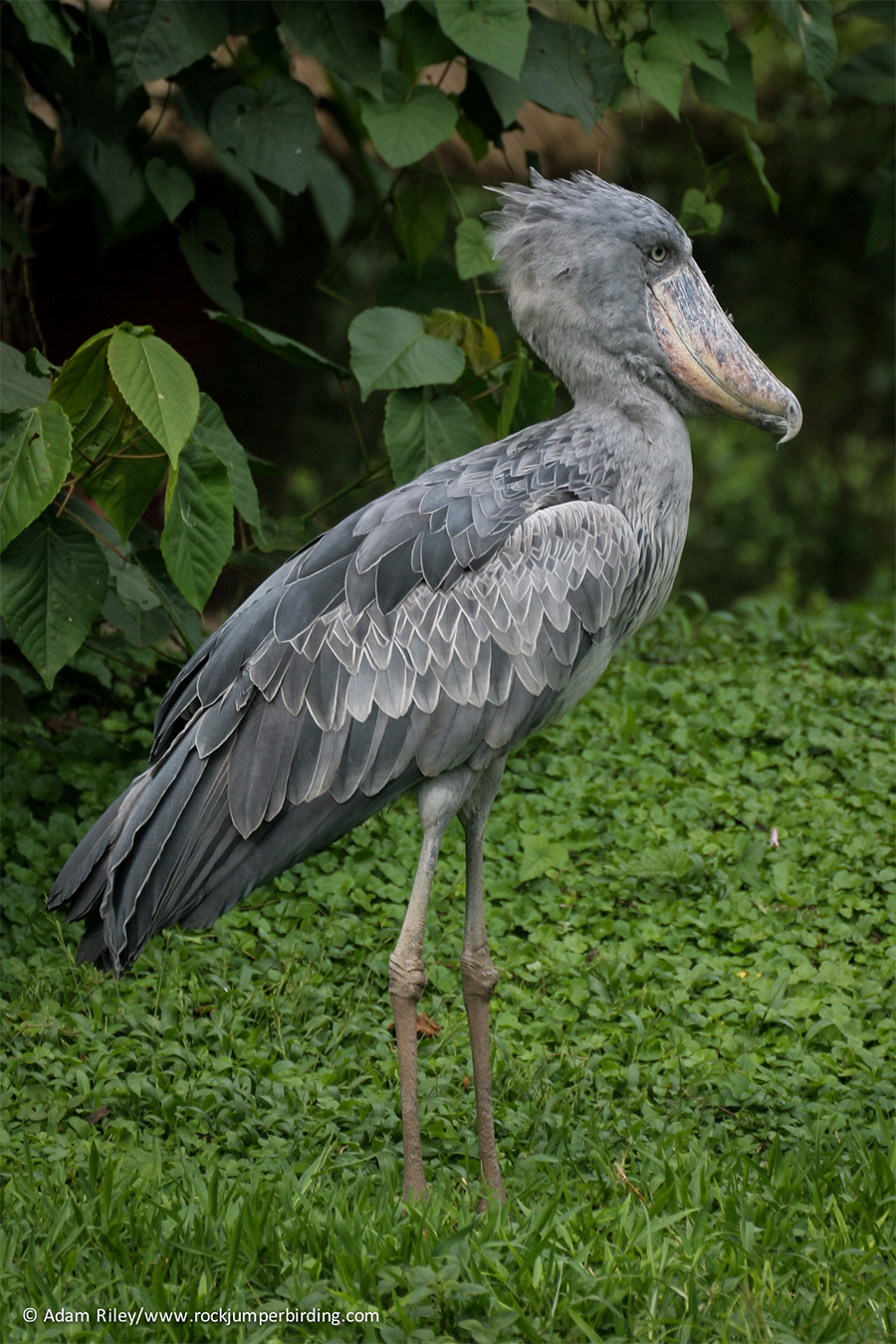 You will spend the morning in Lake Mburo National Park, a superb wetland and Acacia savannah sanctuary that host some highly sought-after species. Mammals you may find include foraging groups of Banded and Dwarf Mongoose surveying the world from atop their adopted termite mounds, Common Zebra, Hippopotamus, Warthog, Eland (the world’s largest antelope), Defassa Waterbuck, Bohor Reedbuck, Impala, Oribi, and Topi. On the shores of Lake Mburo you will scout the papyrus fringed lakes and swamps for Sitatunga and Spotted-necked Otter. Raptor watching will also be a major feature of our morning in this reserve.

Later on today you will transfer through to Entebbe visiting the Kamego Swamps en route where you will search for one of the most distinctive birds in the world, the rare Shoebill. This charismatic species, the only representative in its family, is certainly amongst the most sought-after birds in the world. You will make a special effort to get close to and spend time observing the “King Whalehead.”

After breakfast at your guesthouse, you will make your way to Entebbe international Airport, where this “ultimate wildlife tour” will conclude and you depart on your flights home.