Please see the Peninsula Malaysia Extension for Day 1 to 7 detailed lay out.

For those who have not done the extension, today is set aside as an arrival day to ensure that we are all settled in good time for an early start to our Borneo wildlife tour the following day. Borneo is the world’s third largest island and conjures up images of an untamed and verdant forest paradise. The entire island was originally a vast rainforest bloc but now human disturbance has fragmented what was once an endless sea of greenery. Despite these large tracts of forest still exist and this region is sure to impress even the most seasoned traveler. 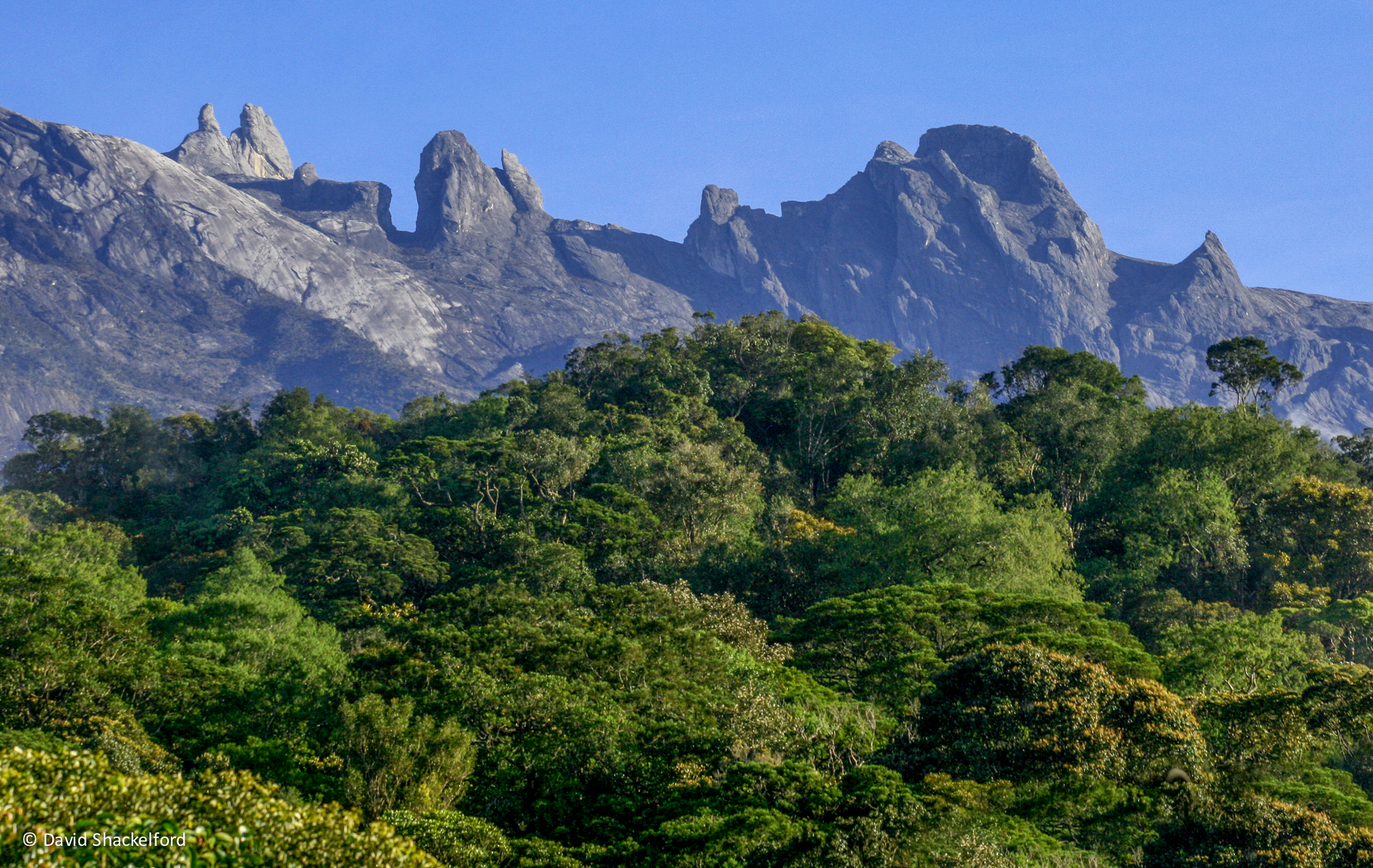 Today we have an early morning start as we strike out for Sukau by way of a domestic flight to Sandakan. En route to Sukau we will stop at the massive limestone Gomontong Caves where an estimated two million bats and a million swiftlets (of four species) make their home. The valuable swiftlet’s saliva nests have been collected for centuries in production of the fabled bird’s nest soup. We will take a tour along boardwalks inside these huge caves and we may observe the birds-nest collectors harvesting Edible-nest and Black-nest Swiftlet for soup (these fearless collectors climb high onto the cave ledges using flimsy rope ladders, an amazing sight and an incredible feat indeed!). In the evening, we will keep vigil outside the caves for the mass exodus of millions of bats into the twilight sky while hasty Bat Hawks and Peregrine Falcons stoop into the masses picking off their evening meals.

Superb rainforest wildlife is to be had along the extensive riparian forests on the Kinabatangan River at Sukau. The surrounding area has unfortunately been reduced to endless tracts of commercial Oil Palm plantations with the result that nearly all the wildlife in the area has been forced into a narrow strip of forest along the river. This concentration of wildlife is phenomenal and we will spend our time on the Kinabatangan River and its black-water tributaries in small-motorized boats.

These boat trips are simply amazing as one is able to creep up quietly and get close to both birds and mammals. 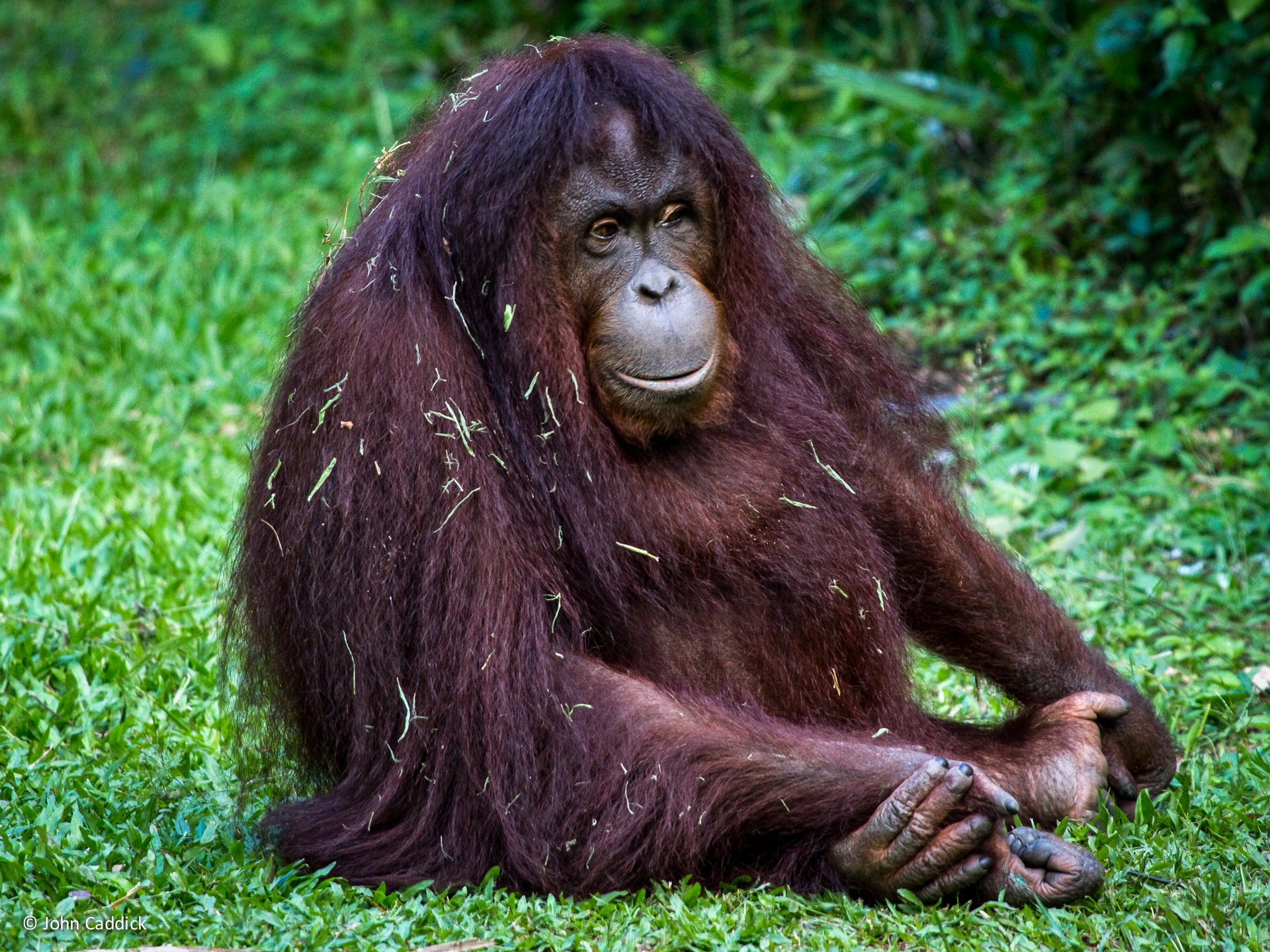 “Old Man of the Forest” – highly endangered Bornean Orangutan is our main target for the trip and Sukau offers us our first real chances for this lowland species. The word Orangutan means “man of the forest” in the Malay language, and we will be extremely fortunate to have the chance to witness this creature in its natural habitat at close range.

Some of the other wildlife we may encounter during our Borneo wildlife tour while meandering through the quiet channels include Red and Silvered Leaf-Monkeys, Long-tailed and Pig-tailed Macaques, amazing Proboscis Monkeys (named for its exceptionally large fleshy nose), Bornean Gibbon, Oriental Small-clawed Otter, Colugo (Malayan Flying Lemur) and Bearded Pig. The striking black and yellow Mangrove Cat-eyed Snake as well as Reticulated Python, the second largest snake in the world, are both possible. The Kinabatangan River also offers a chance to find an incredible array of birds and highlights could well include the rare and highly endangered Storm’s Stork, Lesser Adjutant and Grey-headed Fish Eagle. 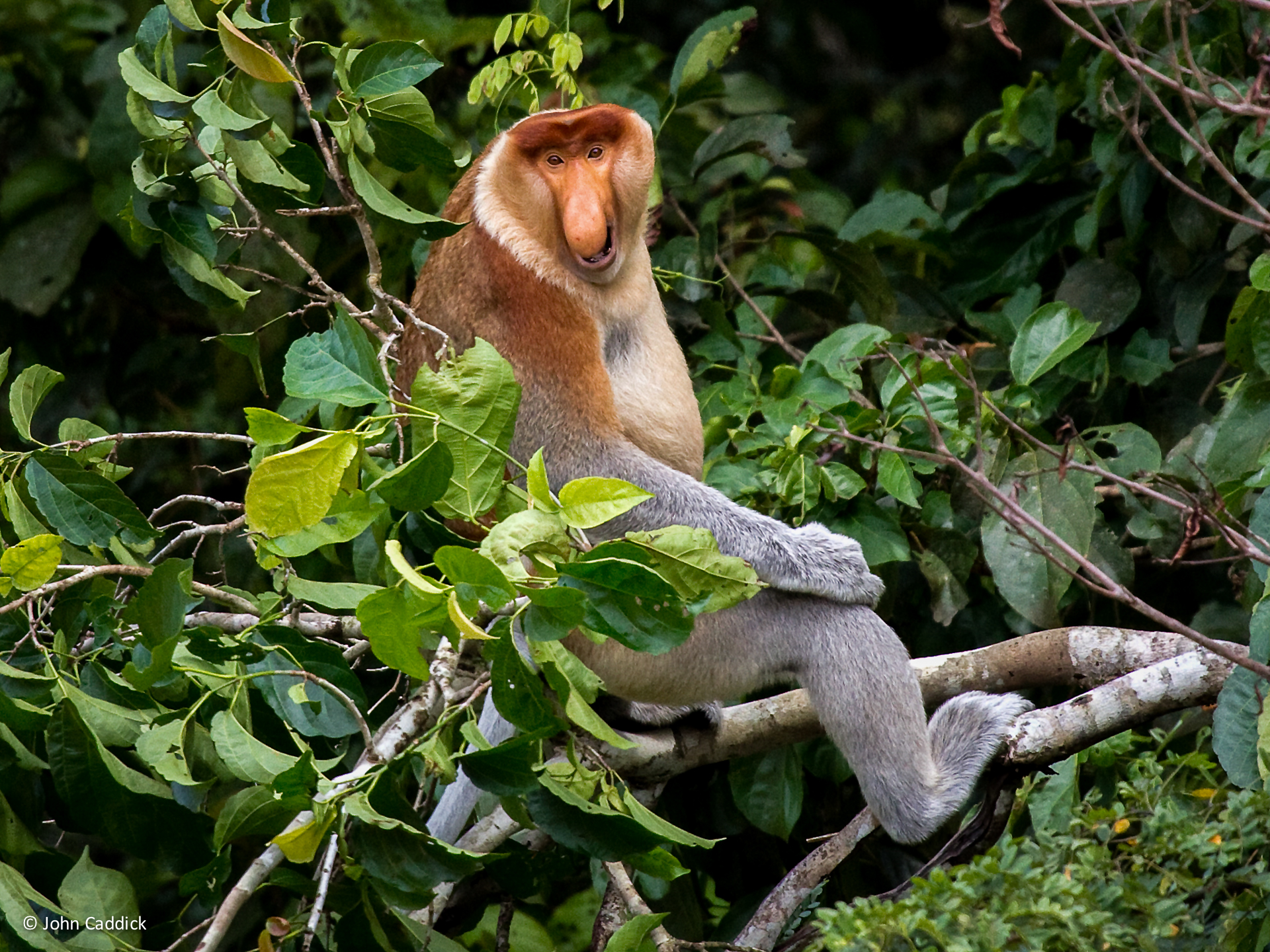 A further highlight on our Borneo wildlife tour will be the opportunity to do a boat excursion on the Kinabatangan River at night. This will give us additional chances of finding Bearded Pig, Malay and Common Palm Civet and if we are very lucky the strange Binturong (Bear-Cat) or Fishing Cat could be sighted. Birding highlights could well include the impressive Buffy Fish Owl, roosting Stork-billed and Blue-eared Kingfishers, White-crowned Shama and Malaysian Blue Flycatcher.

Today on our Borneo wildlife tour, we overland to Tabin Wildlife Sanctuary. The three largest mammals of Sabah occur at Tabin, namely the Bornean Pygmy Elephant (this is not as yet an official subspecies of the Asian Elephant but new genetic data provides compelling evidence that these elephants may be a distinct population), Banteng (wild cattle) and the Sumatran Rhinoceros. Tabin is a sanctuary for the Sumatran Rhino, but these endangered “hairy rhinos” are rare and we would have to be extremely fortunate to come across one of these small, shaggy mammals. We will again have chances for Bornean Orangutan, the ultimate wildlife symbol of these parts, as well as the endemic Hose’s Langur and Bornean Gibbon.

Tabin Wildlife Reserve is one of the richest in terms of wildlife and birds. You are very likely to have excellent views of the endemic Hose’s Langur, Bornean Gibbon, Beaded Pig, several troops of Pig-tailed and Long-tailed Macaques. Other special mammals that we might expect to encounter during our Borneo wildlife tour include Gaur and Bornean Pygmy Elephant. On the night outing, good views of Common Palm Civet, Leopard Cats, Thick-spined Porcupine, Small-toothed Palm Civet and Banded Palm Civet are very likely. The birding is especially excellent here, including all 8 species of Hornbills found in Borneo (Helmeted, Wreathed, Wrinkled, White-crowned, Malaysian Pied, Bushy-crested, Black and Rhinoceros).

Today on our Borneo wildlife tour, we drive on bumpy dirt tracks and navigate river crossings to access the vast primary forest of the Danum Valley Conservation Area before arriving at the world famous Borneo Rainforest Lodge. The Danum Valley conservation area protects some of the last remaining pristine lowland rainforest on the island. We will spend the next few days along the network of excellent trails where we have a good chance of seeing some of the fantastic mammals of the area.

Our rainforest lodge, situated along the banks of the Danum River allows us access to work our way through the diverse and often muddy trails to search for mammals such as Sambar Deer, Greater Mouse-Deer, Bearded Pig, Common Tree Shrew, Prevost’s Squirrel and the diminutive Plain Pygmy Squirrel. A major attraction to this reserve is the fantastic canopy walkway that allows unique access to the little-known canopy world of Borneo’s rainforest lowlands, and here we have excellent chances at locating the Bornean Orangutan. The Danum Valley is a hotspot for many species of primates and highlights here on our Borneo wildlife tour could include the scarce Slow Loris, Western Tarsier, Bornean Gibbon, impressive troops of Red Leaf-Monkey and Long-tailed and Pig-tailed Macaques. Night drives in the Danum Valley can be extremely productive at times and provide a superb opportunity for seeing a range of secretive forest mammals

Species that are regularly seen include Bornean Pygmy Elephant; Sambar and Red Barking Deer; Greater and Lesser Mouse-Deer, Red and Thomas’s Giant Flying-Squirrels, Colugo (Malayan Flying Lemur), Thick-spined Porcupine, Banded Palm, Common Palm and Malay Civet, and Leopard Cat. Rarer species that do occur include the regal Clouded Leopard, Flat-headed Cat, Malayan Sun Bear, Malay Badger, Western Tarsier and the rarest of them all, the Sumatran Rhinoceros. The Danum Valley is also very rich in birdlife and one of the tour highlights could include a rare sighting of the Great Argus, a type of pheasant, which is famous for having the longest feather of any of the world’s bird species. 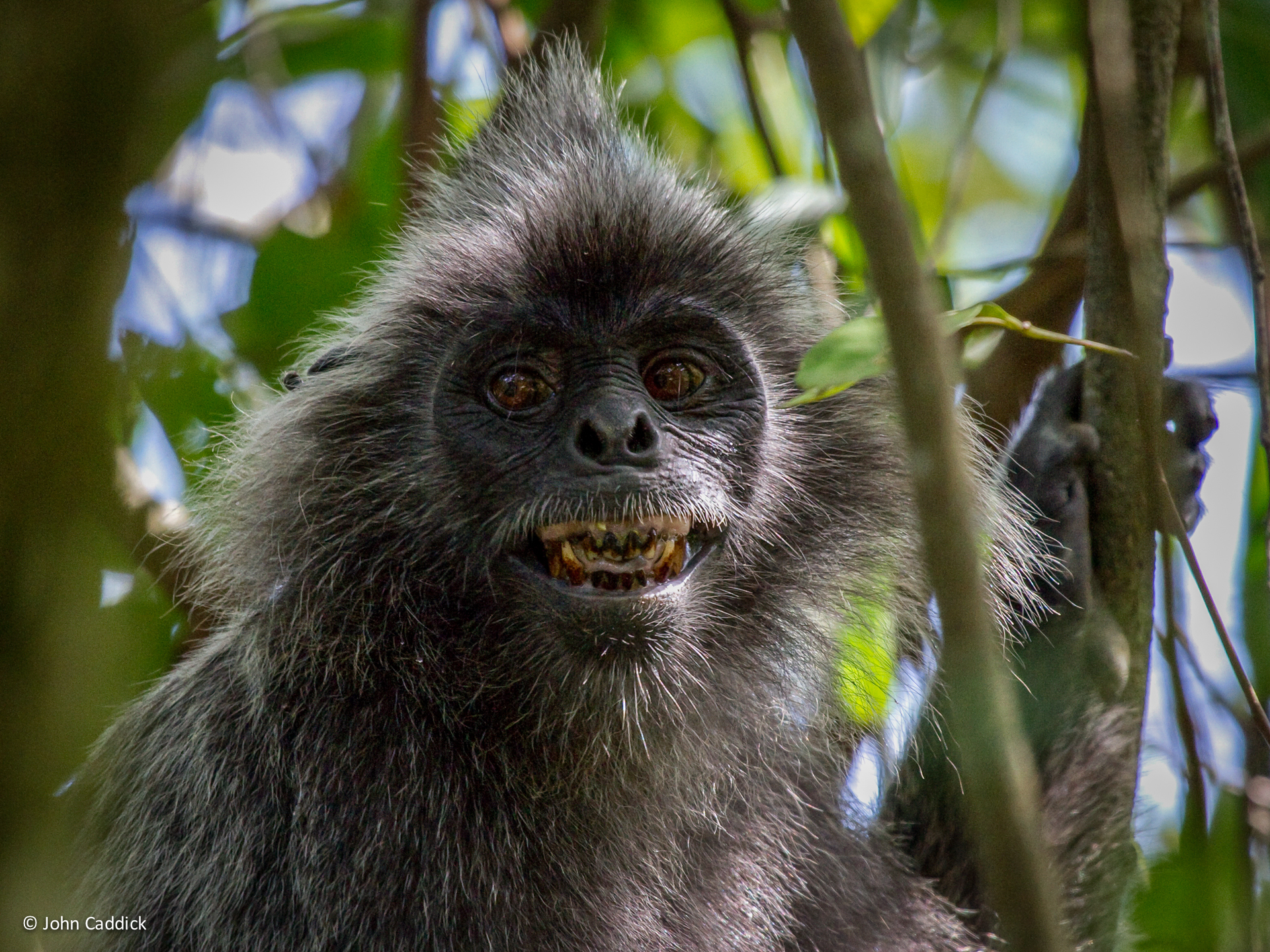 After a final morning in the Danum Valley, we will transfer to Lahad Datu for a flight transfer to Kota Kinabalu where your tour will conclude.