The Geladas of Ethiopia by Adam Riley 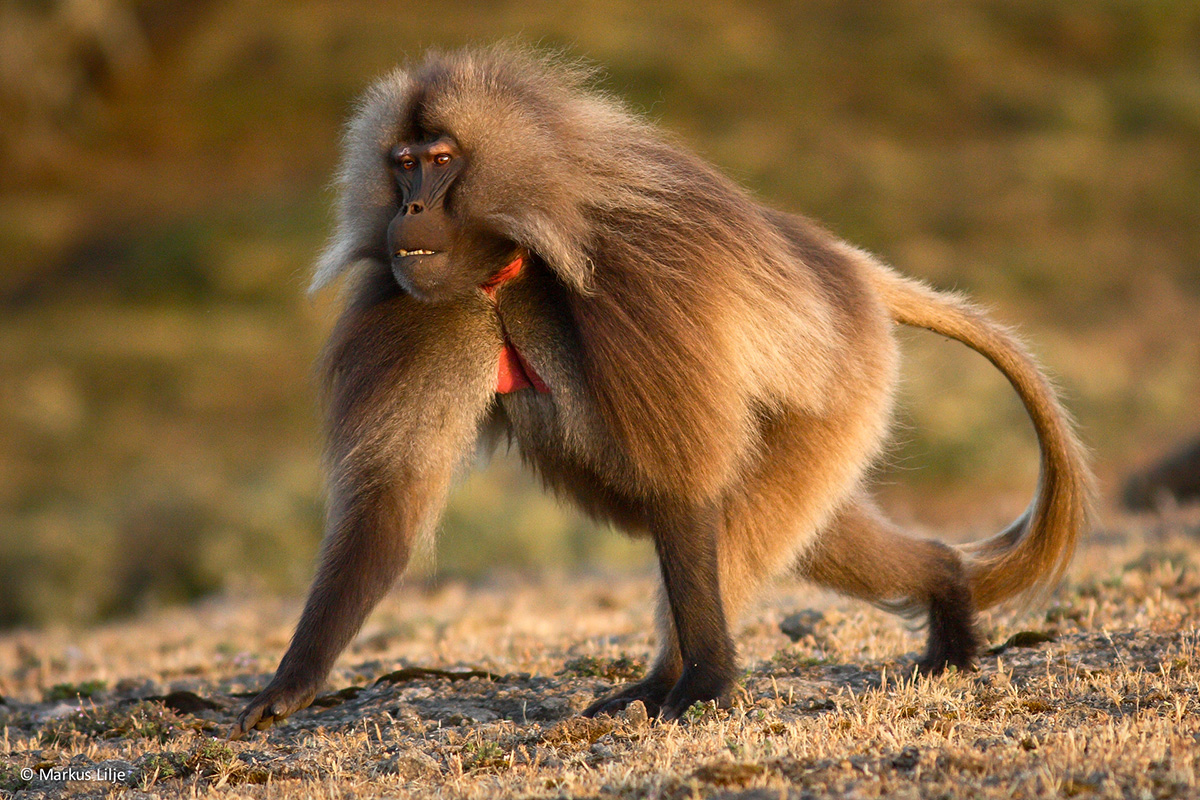 (This blog first appeared on focusingonwildlife.com)

Geladas are the sole survivors of a once abundant branch of primates that historically foraged across the grasslands of Africa, the Mediterranean and India. These relics of times gone by now cling to a precarious existence on the sheer cliffs of Ethiopia’s mountains, from which each morning they materialize, to forage on nearby moorlands, before disappearing down the precipices in the evening. 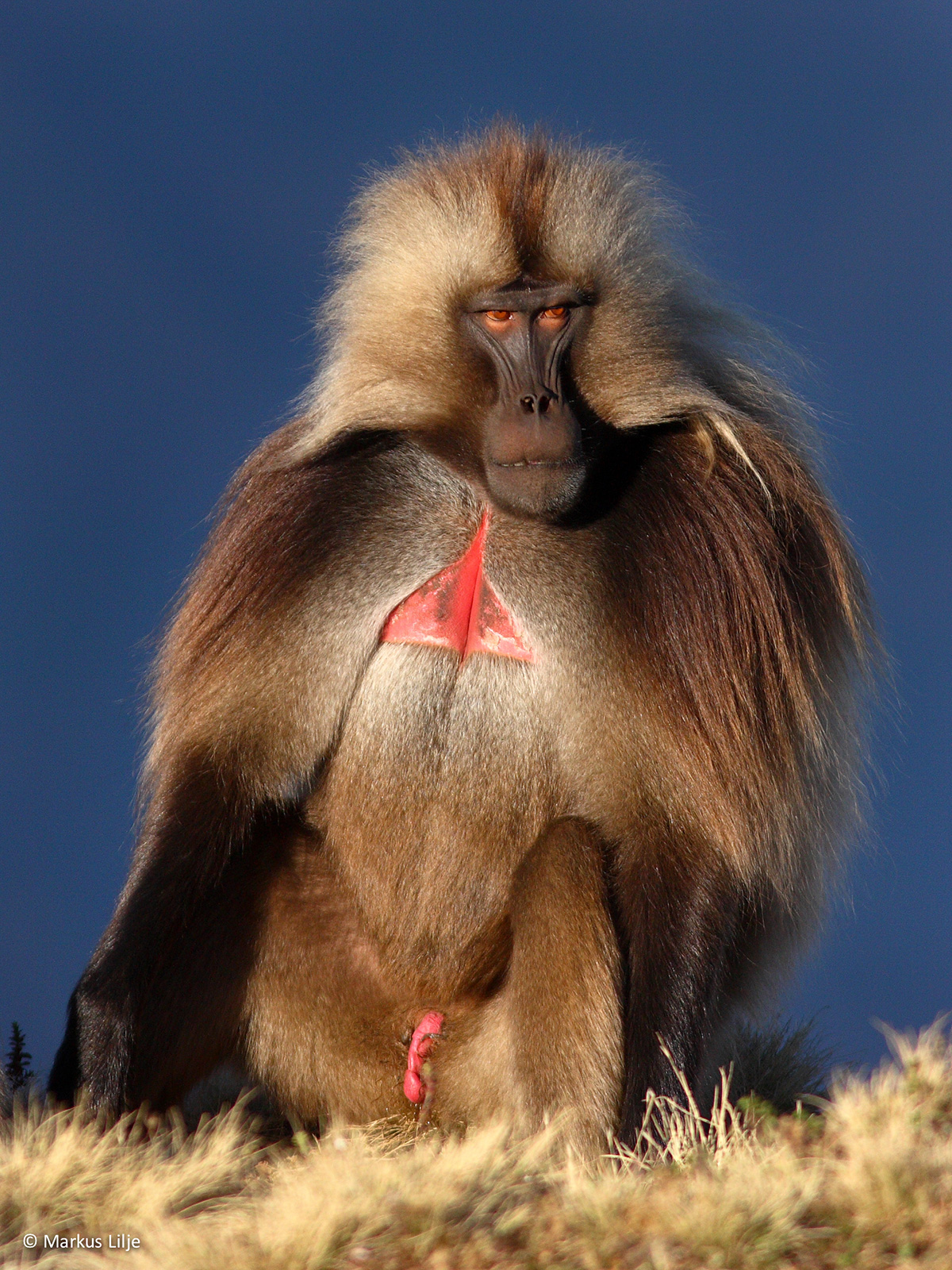 Male Gelada in his prime

For those who have heard of these singular creatures, the name Gelada Baboon would ring a bell. However recent research has shown that they are in fact not baboons, despite superficial appearances, and they are now just called “Gelada”. This was the local name meaning “ugly” used for these primates by the people of the Gonder area in northern Ethiopia when the German naturalist Rüppell “discovered” this species for science in the 1830’s. They have also been known as Lion Baboons and Bleeding-heart Baboons, due respectively to the males’ lion-like cape and tail, and the bare patch of red skin on both sex’s chests. Their scientific name is Theropithecus gelada, the former word meaning “beast-ape” in Greek. 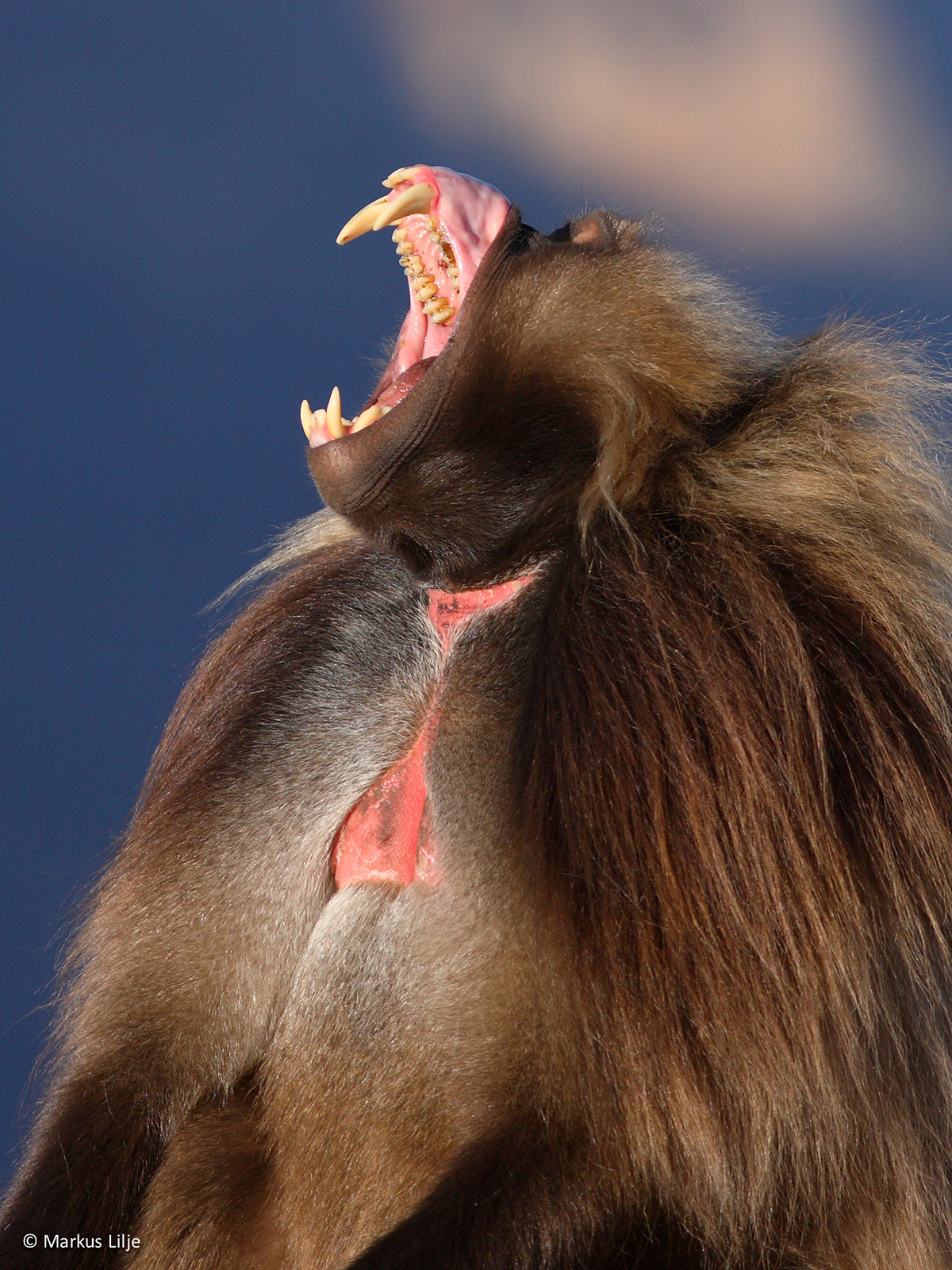 Geladas have numerous special characteristics including:
• sporting the largest canines in proportion to body size of any mammal;
• yet they are the only graminivorous primate (meaning they feed primarily on grass, not to be confused with a seed-eating granivorous animal!);
• they have the closest vocal repertoire to humans of any mammal;
• they have the most complex social structure of any mammal after humans; and
• they are the most terrestrial primate after humans.

Appearances are certainly deceiving when it comes to Geladas. Their fierce physical appearances give way to a far more fascinating social structure once you spend a bit of time with them. In parts of the Simien Mountains of northern Ethiopia, from which I have just returned, Geladas have been protected from persecution for some time. This has resulted in their populations returning to natural levels and their fear of humans being curtailed. We were able to spend hours sitting right in amongst super-groups of 500-600 Geladas that just carried on with their daily business in total oblivion to our presence. These experiences were the highlight of my trip to Ethiopia and one of the most fascinating and enjoyable encounters I have ever had the privilege to experience in many years of wildlife watching.

The basic Gelada social unit is a harem (or unimale group) made up of a dominant male and several females (1-12), their young and sometimes subordinate males. The next tier is a band that consists of several harems (usually 2-27), and this is the main social aggregation in which most Geladas spend their lives. Especially in the dry season, bands join together forming grazing herds, which can number up to 1,200 animals (although 500-600 is more normal.) Males that do not have attached females also form bachelor groups that usually associate around the periphery of the bands or herds. A harem system would indicate that the males gather and forcibly retain the affections of their females, as is the case with the savanna baboon species, but not with Geladas. The females are the ones that form the strong hierarchical bonds, often matrilineal, within the harems and they usually determine which male will become their harem “leader”. For males (averaging over 40 pounds and nearly double the female weight), its all about showmanship. They strut about flicking their luxurious fur capes, roaring, displaying their massive canines, chasing off rival males and generally just releasing their built-up testosterone, but back at the ranch, it’s the females that actually call the shots. In fact most of the aggression witnessed is started between females and this then draws in the males. Males maintain their relationships with their females not by dominance but by grooming them, but the females sometimes band together and attack their male if they feel he is shirking his duties by not grooming them sufficiently or not protecting them properly. 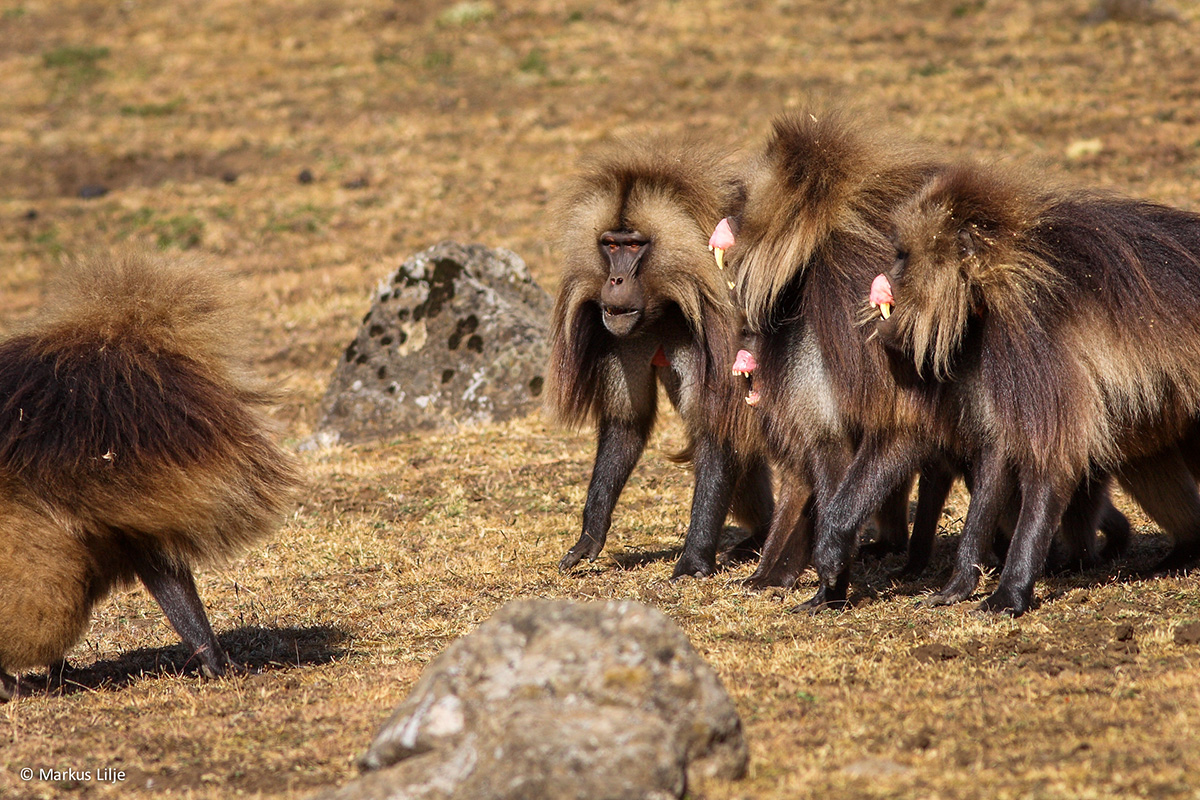 We were attracted to a massive commotion going on the boundary of a huge herd of Geladas. Groups of younger males were racing around chasing large males, all of them making an unbelievable racket and flaring their lips which are pulled over their gums to show off their formidable teeth. Some males had climbed yellow-flowered St John’s wort trees and were leaping up and down, shaking the branches and emitting what is accurately termed a “roar-bark”. In fact, Geladas so seldom climb trees that we actually witnessed several big males falling out and others being too boisterous and breaking off massive branches, with both the branch and the monkey hitting the ground rather solidly! We subsequently learnt that this behavior had to do with challenges between dominant males and bachelor males and is how harem males show off their virility. 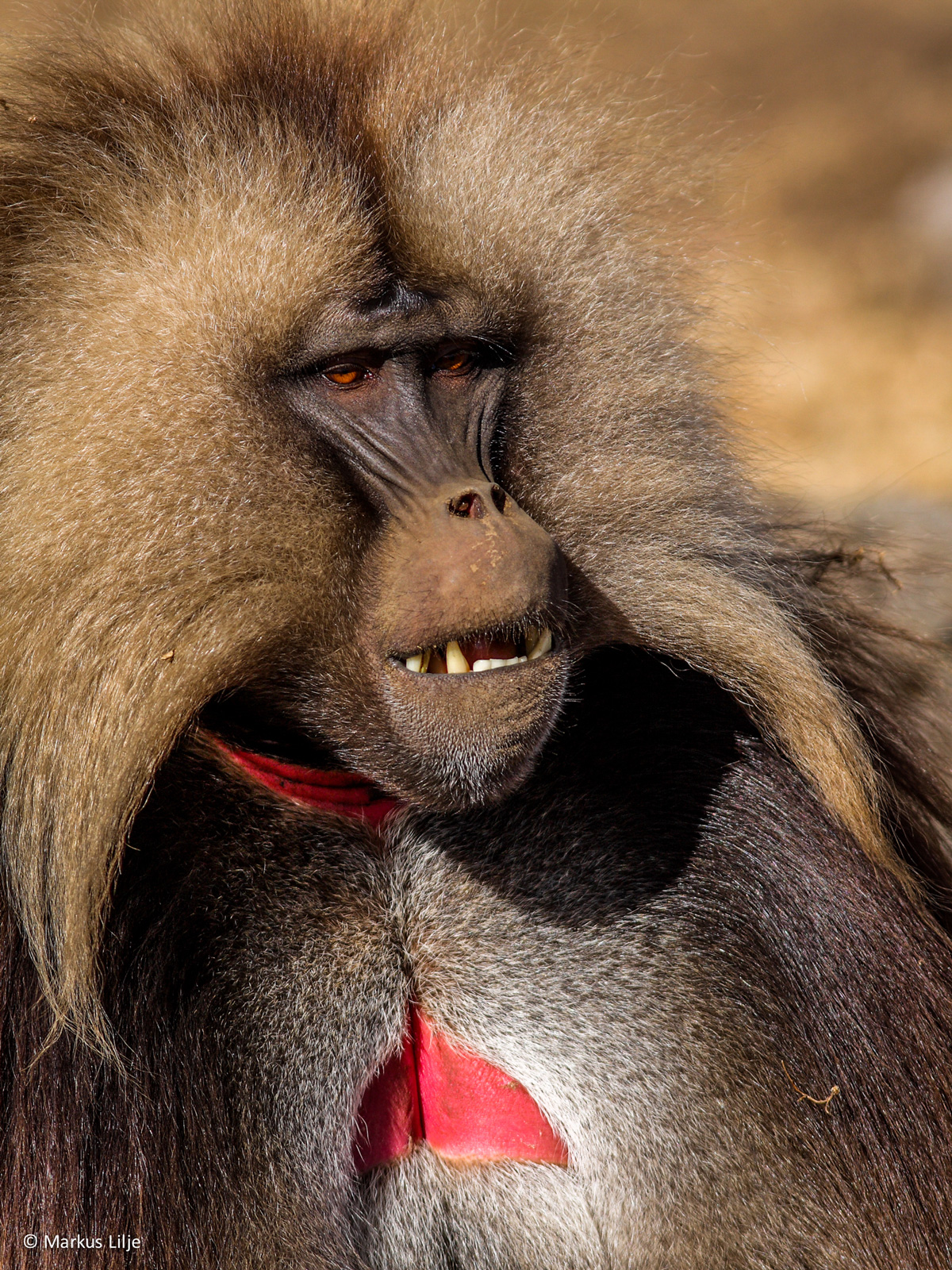 As mentioned earlier, Geladas spend their nights on inaccessible cliffs, where they sleep on ledges. In the morning we observed them climbing up these massive cliffs, never in a rush, as they paused to groom or just sun themselves as the mood took them. The rest of the day is spent on the plateau moorlands close to the cliffs. They seldom, if ever, venture more than 2 miles from the safety of cliffs. At first the herd gathers close to the edge where they interact in social behavior for a few hours with only intermittent feeding. Here they relax in the sun, groom each other, copulate, yawn, lip flare, head-bob, stare at each other with raised pinkish eyelids; and the youngsters of all ages enter into the most entertaining rough-housing sessions. The whole time there is a constant chatter from the Geladas with calls signifying contact, aggression, defense, reassurance, appeasement and a variety of other social interactions. In fact Gelada social studies have been of great relevance in analyzing the evolution of human social behavior.

Feeding then begins in earnest as they move away from the cliff ledges and spread out over the grasslands. Geladas have several adaptations to their unique diet including a fatty rear-end with two large pads, since they spend most of their day sitting upright on their buttocks, picking grass blades (which form 90% of their diet.) They usually pick 10-20 green blades before popping these into their mouths and chewing. Every so often, they will bend down and pull a stem of grass out of the ground with their teeth. They also eat seeds and insects but won’t go to much effort for the latter. In the dry season Geladas also dig for roots and rhizomes using their tough hands almost like pick-axes. The have a curious shuffle-gait whereby they remain in this upright foraging posture but move forward bipedally, a meter or so, from one feeding spot to the next. They have a very specialized dentition with small, incisors, essential for this very abrasive diet. As evening approaches, the bands move back towards their roosting cliffs and they enjoy a second social session as they soak up the last rays, before descending down the precipices for the night.

With many primate species, females indicate their sexual status with colored and swollen genitalia and buttocks, however since Geladas spend almost the entire day sitting, they have instead developed an hourglass-shaped patch of bare skin on their chests which becomes bright red and is surrounded by swollen, liquid-filled blisters when in estrus. Males sport a larger heart-shaped bare batch encircled by pale fur, that shows off their dominance status.

Gelada numbers have plummeted over the past few decades due to droughts, exportation for laboratory experiments (this disgusting practice seems mercifully to have stopped) and hunting of males for their capes used in traditional dancing and coming-of-age ceremonies by the Oromo people (hunting is now also banned with a 15-year prison sentence for offenders). However the major factor is due to the rapid human population expansion in Ethiopia that has meant that cultivation (even in national parks!) has encroached on Gelada home ranges causing loss of feeding habitat and conflicts with farmers. Competition with domestic livestock has restricted some Gelada bands to poorer foraging on steep slopes. From an estimated 440,000 in the 1970’s, current population estimates range between 100-250,000. They are however classified by IUCN as Least Concern.

Although Geladas can be seen within a few hours drive from Ethiopia’s capital Addis Ababa, the best place for spending time with these fascinating monkeys is Simien National Park north of Gonder where these images were taken.For more details on birding, wildlife and photographic tours which will take you to prime areas for quality time in and amongst Gelada bands (an experience of a lifetime that can’t be more highly recommended), as well as for observing a myriad of other unique Ethiopian wildlife, please view our tours. 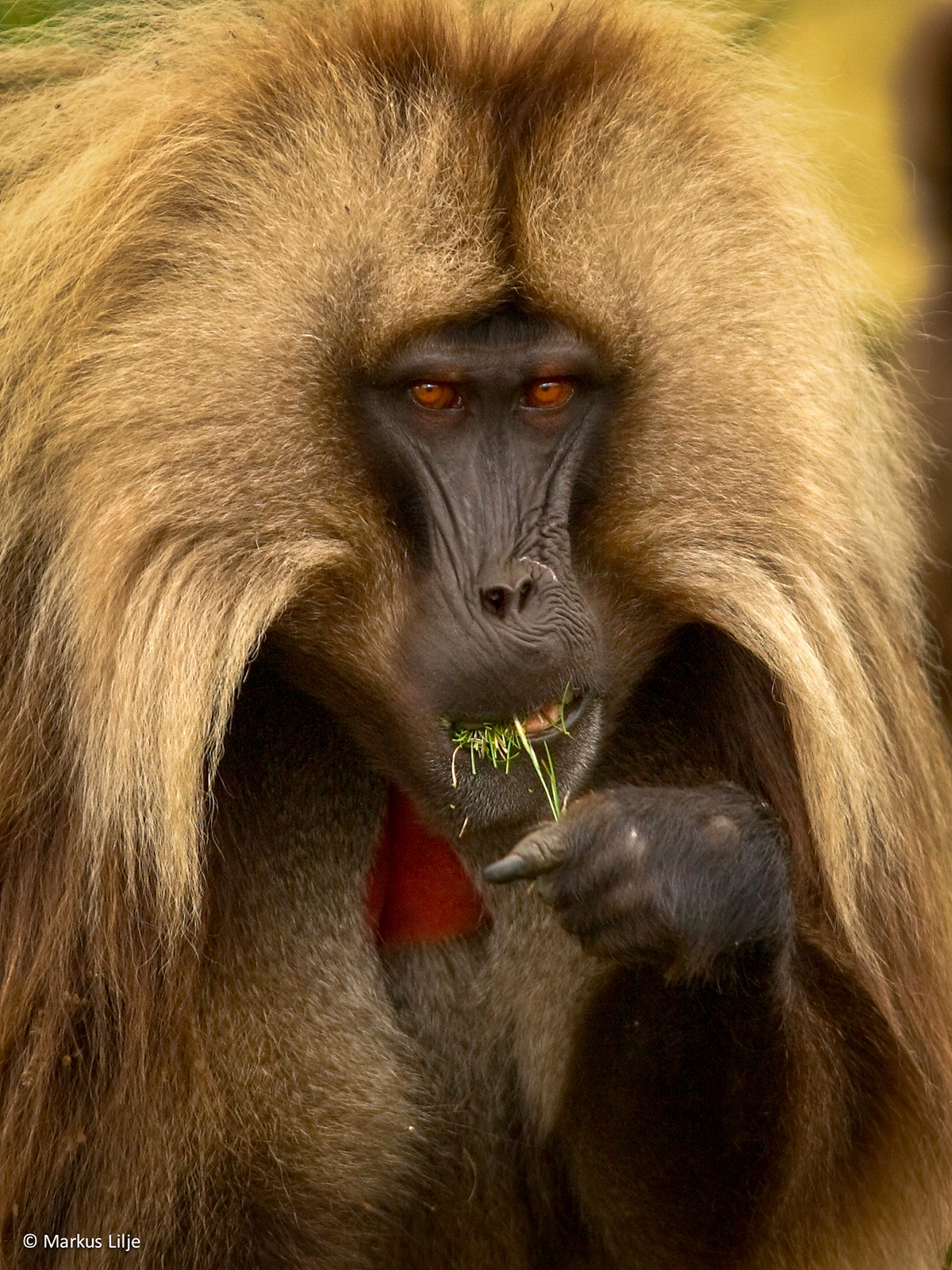 Despite their fierce appearance, Geladas feed mostly on grass blades