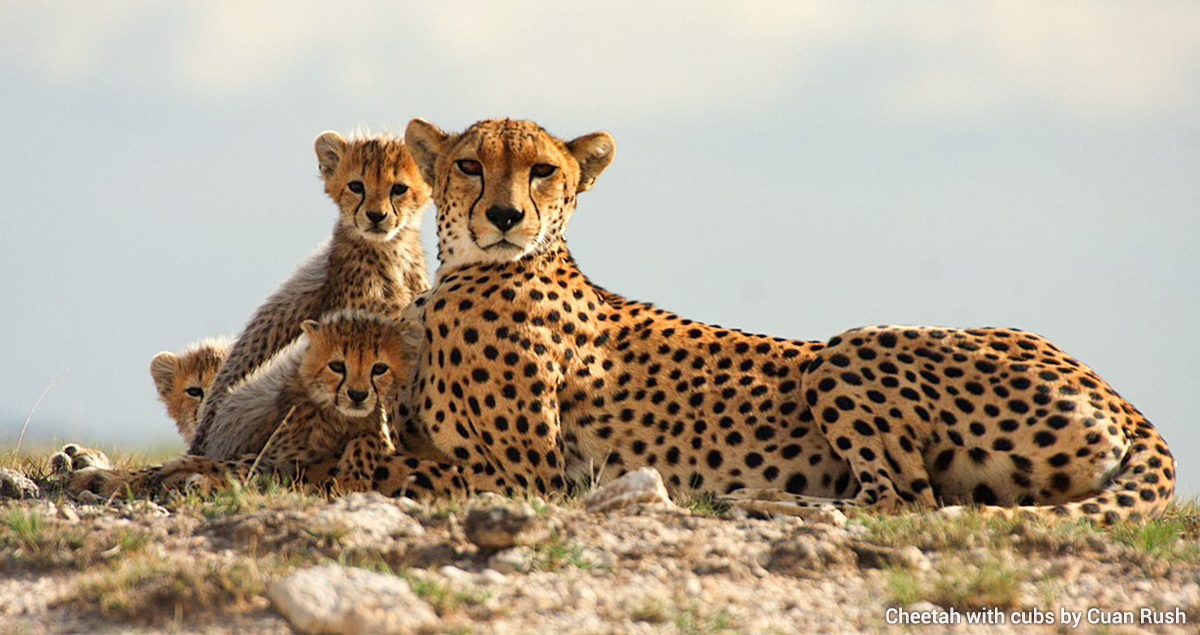 As mammal watching destinations go, Northern Tanzania is easily regarded as one of the world’s best and most iconic; and for good reason! From the hundreds of thousands of wildebeest on their annual migration across the vast plains of the Serengeti in the south to the Maasai Mara in the north to the superlative Ngorongoro Crater, Tanzania holds phenomena largely unmatched by anywhere else in the world. Northern Tanzania’s various parks and reserves also boast one of the world’s highest concentrations of predators. While Lion, Leopard, Cheetah and Spotted Hyaena understandably steal the limelight, this area is also home to a number of smaller species: Bat-eared Fox, Golden and Black-backed Jackals, African Wild Cat, Caracal and the less frequently encountered Serval.

Our featured photo this month is of the attractive and graceful Cheetah; a female with her three young cubs are the stars of this stunning study by Cuan Rush. Cheetah are truly beautiful creatures, and seeing these fleet-footed cats sprint across the grassy plains is truly an unforgettable sight. One that is usually high on any wildlife enthusiast’s wish list.

In the early 20th-century, it is believed that about 100,000 Cheetah roamed the Earth. Slowly, however, they have been exterminated from large portions of their former range in Africa and the Middle East. Once plentiful in places such as India, Cheetah are now extinct in 20 countries and occupy only about 17% of their historic range. Fewer than 10,000 Cheetah survive in the wild today, with the remaining significant populations found in Botswana, Namibia, South Africa, Kenya and Tanzania.

The Cheetah’s social system is unique among cats – apart from brief encounters with the opposite sex during mating, females lead solitary lives while males form lifelong social coalitions of 2-5 individuals, often with siblings. Females raise their cubs on their own, teaching them critical survival skills. Being a young Cheetah is risky business. Cubs are most vulnerable from 6 weeks to 4 months of age and in open habitat such as the Serengeti plains, less than 5% of cubs reach adulthood. Predation by Lions and hyaenas accounts for more than 70% of mortality.

Cheetah hunt in the early morning and late afternoon, using their phenomenal eyesight – often scanning first from elevated vantage points, such as rocks, termite mounds and low, horizontal tree limbs, to locate prey, which includes small to medium-sized antelope, young warthogs, hares and gamebirds. Solitary females and males may hunt every 2 to 3 days but females with cubs, such as the one pictured here, need to hunt every day. Although Cheetah enjoy a high average hunting success rate of 50%, this is also high risk; in open habitats, up to half of kills are stolen by other predators.

The magnificent parks of Northern Tanzania offer excellent opportunities for seeing this iconic species. During our upcoming Northern Tanzania Safari, ample time will be available to explore the Ngorongoro Crater and the Serengeti, where we usually have extensive sightings of Cheetah, together with many other mammals, birds and other wildlife. Not only are these great places to find game and birds, but the Serengeti’s expansive green-gold savannas dotted with thorn trees, together with the grasslands, patches of forest, and often cloud-shrouded rim of the Ngorongoro Crater also make them ideal for photography. These areas are stunning and offer long, undisturbed views of utterly dramatic panoramas!

*Alternate currencies are for comparative purposes only